Chard is a plant with large green leaves and fleshy white stalks. Its origin is probably in the coastal regions of Europe, from the species Beta maritima, from which chard is obtained on the one hand and beetroot (variety vulgaris) on the other.

It was the Arabs who started its cultivation around 600 B.C. Both the Greeks and the Romans knew and appreciated chard as a food and as a medicinal plant. Nowadays, Central and Southern Europe and North America are the main producing areas.

Chard varieties vary in the colour and size of their leaves and stalks. The variety Swiss Chard, also known as Silver Chard or Seakale Beet, has whitish stalks and greenish and wrinkled leaves. Ruby Chard and Rainbow Chard, on the other hand, stand out for their thick, reddish stalks.

As far as vitamins are concerned, it stands out the presence of folates, vitamin C and beta-carotene or provitamin A (the organism transforms it into vitamin A as it needs it). Raw chard contains much more vitamin C than cooked chard, so in salads it is a good source of this vitamin. The outermost green leaves are more vitamin-rich (up to 50 times more in the case of beta-carotene). 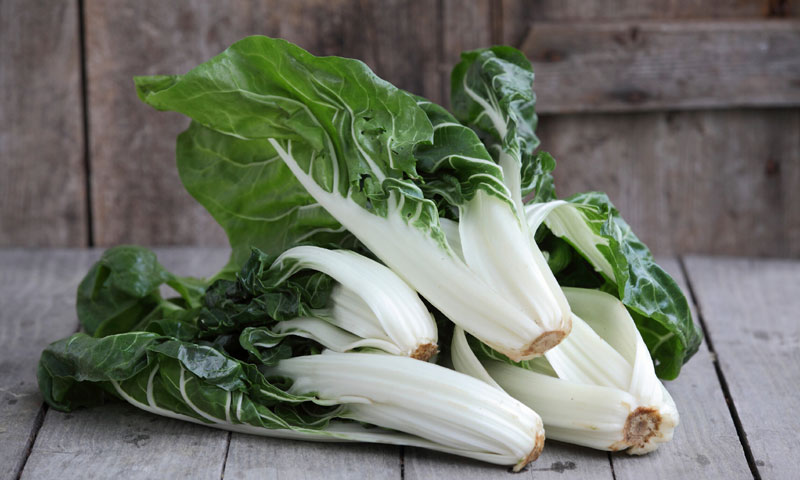 In slimming diets, chard, simply boiled, steamed or sautéed with a little olive oil, is a highly recommended dish. Because of its excellent folate content, it is an essential food in the diet of pregnant women.

Deficiency of this vitamin during the first weeks of pregnancy can lead to malformations in the development of the nervous system of the future baby.. In salads its vitamin content is higher, as it is very sensitive to heat, and when cooked, an important part of it is lost.

On the other hand, the leaves have laxative and diuretic properties, which are beneficial for a number of conditions: constipation, haemorrhoids, hypertension and fluid retention, among others. It is important for diabetics as it mobilises insulin, prevents prostate cancer, and is consumed as a fresh vegetable. However, chard contains a lot of oxalates. Therefore, they should be consumed in moderation in case of gallstones or renal lithiasis.

Chard : In the kitchen:

The taste of chard is similar to spinach, although slightly milder. The thin, green leaves require less than half the cooking time of the white stalks, so it is better to separate these parts beforehand to avoid the leaves becoming too soft due to excessive cooking time.

When it comes to buying them, the best quality specimens are those with smooth, shiny, uniform green leaves (without spots), with hard, white stalks. If the leaves are very large and wrinkled, it means that they have already flowered or are about to do so, and this causes their stalks to develop a very bitter taste.

If they are bought fresh and are to be frozen, they must be previously blanched for 2-3 minutes in boiling water and then frozen. It is a very perishable vegetable, so they should be consumed as soon as possible. If we keep them in the fridge, they can be preserved for a few days more.