A rugged geography central to explaining Afghanistan's tribal and ethnic diversity, its fierce desire for independence. At the heart of a colonial rivalry between Britain and Russia, in the 19th century. Then, at the heart of the Cold War, with the Soviet invasion. The stakes in the war on terrorism after 9/11. Not forgetting the tortuous relations with neighbouring Pakistan, the key role of the Taliban and today, the presence of Daesh. 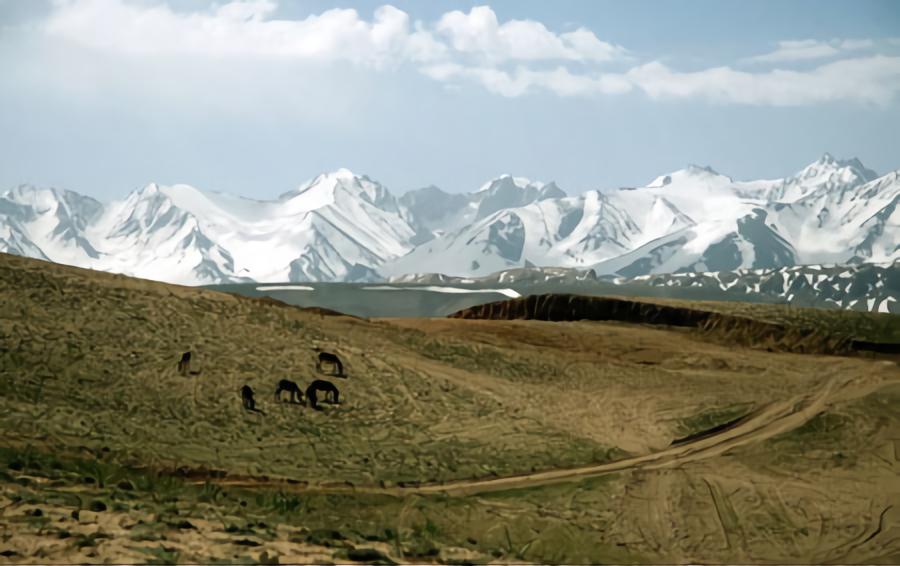 the land of Cdt Massoud, so well described in Joseph Kessel's "Les Cavaliers". Welcome to Afghanistan, with this view of the Hindu Kush, these mountains that belong to the Himalayas.

Tribal and Ethnic Diversity in Afghanistan : the Soviet Union

Afghanistan, a country with a history as rugged as its geography. Located in Central Asia, Afghanistan is a landlocked state with an area of 650,000 square kilometres. It is at the crossroads of the Iranian world to the west and the Indian world to the east. The Afghan population, estimated at 35.5 million in 2018, is made up of very different peoples. Indo-Iranian peoples, with the Pashtuns and Tajiks to the north, the Baloch to the south. Descendants of the Mongols, the Hazaras, in the centre. Turkish-speaking Turkmen, Turkmen, Uzbeks and Kyrgyz in the north.

In addition to minority Aimaks, Pamiris and Nouristanis. Afghans are predominantly Sunni Muslims. Fifteen percent of them are Shia. Official languages of this Islamic republic are Pashto and Afghan Persian, called Dari. The country is being organised around the Hindu Kush mountain range, passable in its centre by all-too-rare crossing points. In these mountainous landscapes, the population is concentrated near streams.

Let's start with a bit of history. In the 19th century, Russians and British fighting over Afghanistan for the conquest of Central Asia. In vain. Afghanistan is recognised as independent in 1919 by the British. But in the 20th century, Russia did not give up to control Afghanistan because it is for it a strategic access to the Indian Ocean. Moreover, Russia, which became the USSR, is very interested in the Afghan political situation.

In the midst of the Cold War, Russia decides to invade the country in December 1979 to help the Afghan communist regime that has just taken power. This brutal diet is disputed in Afghanistan. Incidentally, the Soviet Union worried about the recent victory of the Islamic revolution in Iran, another border country. Then begins a kind of Soviet Vietnam: 10 years of war that will oppose the Red Army, confined in cities, to the mujahedin, the Afghan Resistance fighters, financially supported by the United States and Saudi Arabia.

The mujahideen are pushing for the Soviet withdrawal in 1989. But this Soviet withdrawal does not mark the end of the fighting. On the contrary, it marks the beginning of a civil war between the Afghan communist government, and the mujahideen, themselves divided between Pashtuns and Tajiks. Neighbouring countries are getting involved. India supports the Tajiks and their allies led by Cdt Massoud. Pakistan supports the Pashtun warlord Gulbuddin Hekmatyar. Pakistan sees Afghanistan as a rear base in case of conflict with India and therefore tries to bring the Pashtun ethnic group to power.

15% of Pakistan's population is of Pashtun origin. It is the second largest ethnic component of the country, and these Pashtuns live along the Afghan border. But it is Massoud who seized power in April 1992 in Kabul. In response, Islamabad created the Taliban in 1994, in the North-West Frontier Province, a militia recruiting young Afghan refugees in Koranic schools, hence the name "Taliban" which means "students of religion".

The Taliban quickly gain influence in Afghanistan, taking Kandahar, which becomes their stronghold, then Kabul in 1996, chasing Massoud and his northern alliance to the north of the country. The Taliban then proclaimed the Islamic Emirate of Afghanistan, ruled from Kandahar by Mullah Omar, Commander of the Believers.

In the name of rigorous Islam, a moral police force is created, women relegated out of public life, girls' schools closed and the magnificent pre-Islamic heritage of the Bamiyan Buddhas destroyed. Mullah Omar offers his protection to radical Islamists, including Osama bin Laden, the mastermind of the 11 September 2001 attacks and the sponsor of Massoud's assassination.

In reaction, the US-led coalition overthrows the Taliban regime and NATO forces are deployed in Afghanistan. The international community and the new president, Hamid Karzai, will not arrive to wipe out the Taliban who found refuge in tribal areas and Pakistani Baluchistan. A dialogue has been initiated with the Taliban essential by Pdt Karzai, at the end of 2000, which yielded nothing, nor with his successor, Pdt Ashraf Ghani, elected in 2014. For the Taliban, the prerequisite for any agreement is the start of foreign troops.

For Kabul, an agreement is the prerequisite for the departure of foreign troops. The Afghan population remains deeply divided today. Since 2014, although the country is run by a national unity government, it does not control the entire territory. Only 65% of Afghans live under government control or influence. At the end of 2014, the withdrawal of the indispensable NATO forces, from 130,000 to 16,000 men, has trained worsening insecurity.

In 2017, between combat zones and urban attacks, the population also counted more than 13,000 civilian casualties. In the capital Kabul alone: 1,300 dead. The international community has made efforts to develop the Afghan national army, which has more than 300,000 men, but this army is judged to be ill-prepared, ill-equipped, even if it has been able to contain, to the best of its ability, the increased pressure from the Taliban.

Finally, the situation is aggravated by the emergence, in 2015, of a Daesh subsidiary, the Islamic State of Khorassan. Some Taliban will join this Afghan Da'esh. Many are former Pakistani Taliban, expelled from the tribal areas. Some of the Daesh soldiers in Syria will also join this new Afghan home. However, most Taliban fights oppose Daesh, particularly in the province of Nangahar, a stronghold of the Islamic State, with an increase in attacks. 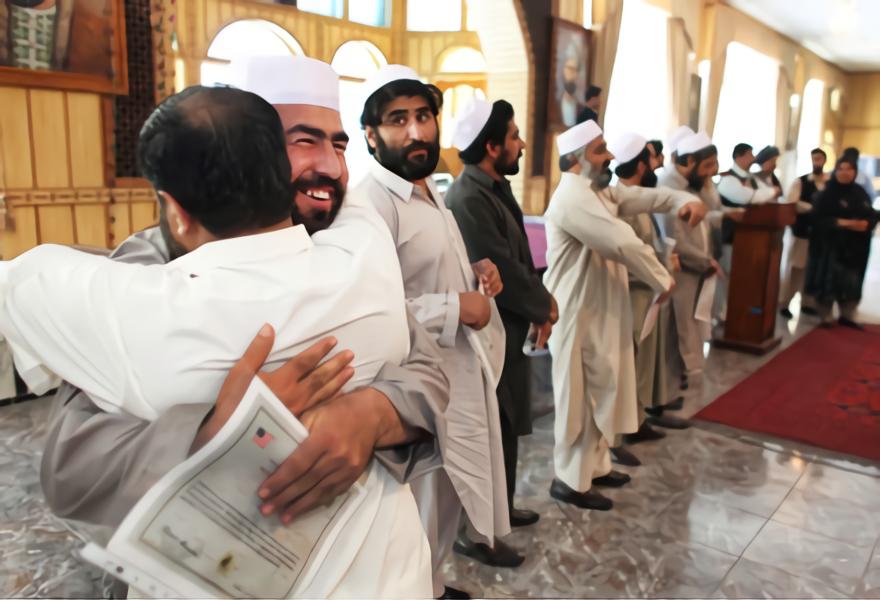 The security problem remains a major obstacle to economic growth, which was only 2.5% in 2016 and 2017, the lowest in Asia. Despite this bleak outlook, there is economic potential in Afghanistan, due to the country's geographical position.

China and India have therefore launched investment and support programmes for major regional projects. The establishment of a maritime and land axis between Mumbai, Chabahar and Kabul, although potentially threatened by anti-Iranian sanctions by Donald Trump. The CASA-1000 axis, which should allow to deliver, from 2019, electricity from Central Asia to Afghanistan and Pakistan.

The TAPI pipeline, Turkmenistan, Afghanistan, Pakistan, India, an old project restarted in 2015 and due for completion in 2019. And then the rail link project established by China as part of its new Silk Roads. The lapis lazuli corridor, to link Afghanistan, via the Caspian and Turkey, to Europe. Economic openings relativise because to date, the only sector to expand is drugs. The UN notes an increase, in 2017, 63% of opium cultivation, a major supplier of rural jobs.

For many experts, the Taliban are at the centre of the Afghan game. Washington wants to impose reconciliation with them and even talk directly to some Taliban. But the United States faces competition from Russia: Moscow has already hosted international talks in which the Taliban. They want to be electoral referees in the April 2019 presidential election.

The Taliban are more powerful today than ever before. Playing both nationalist and religious cards, they present themselves as those who will drive out the godless Westerners and as those who will protect the country from Daesh. To go further, this work published by De Boeck, to understand the great economic, social and political problems of Afghanistan today.